The city hopes to win grants for bike-friendly improvements

By: Steve Jones – sjones@thesunnews.com
The city of Conway is currently seeking to obtain a $400,000 grant from the South Carolina Department of Transportation in order to construct a 3,300 foot multipurpose trail along Long Avenue Extension. If the grant is successfully obtained, the city would then add $100,000 for the construction of an eight-foot-wide path that could be used for both walking and cycling. The proposed trail would be located parallel to the road, separated by a 5 foot path of grass. Construction is carded to take place approximately one year after the grant is awarded.

Possible 50 mile trail named “The Grand Loop” to be added to West Michigan’s existing trails. The proposed route would lead from the bike park to four city parks, where new trails would be constructed.

Safe Routes Hudson, an initiative embarked upon to improve pathways as well as educate and promote safe, long-term sidewalks, paths and bike routes, is carded to have a meeting for interested persons on Feb. 17 from 7 to 8:30 p.m. at Ellsworth Hill Elementary School, 7750 Stow Road in Hudson.

The proposed Thoroughfare Development Plan and Hike and Bike Master Plan for the Arlington community has received mixed responses. Some residents are all for adding more than 100 miles of bike lanes to Arlington’s streets, considering that current biking conditions in Arlington are deemed less than ideal. Other residents however believe that the money to be spent on these new bike lanes should be focused towards bettering existing roads (considering the increased demand on roadways since the thoroughfare plan was last updated in the 1990’s).

Soon to be available for purchase at $24.95, a 12 set map detailing over 280 miles of Hendrick’s County bicycle routes.

Work on new North-South bicycle trail connecting Northeast Portland’s Rose City Park to Southeast Portland’s Woodstock neighborhood to be commenced in 2012. The proposed bicycle trail (Thompson Street along Northeast 57th Avenue to Southeast 52nd Avenue and Woodstock Boulevard) is currently carded to be 4.5 miles in length. As proposed, parking will be affected along Southeast 52nd Avenue between Division Street and Woodstock Boulevard through the removal of roughly 200-250 parking spaces on one side of the street.

To read about plan specifications and the possible effects click here.

Bicyclists may be forced to hit road

Members of the bicycling community of Sioux Falls South Dakota will be forced to find other cycling routes as roughly 9 miles of bike trails will be temporarily closed for a significant portion of the year. The closures due to necessary infrastructure repair projects along with a greenway project, are carded to take place in the Spring and Summer leaving pedestrians and cyclists to find alternative routes. To read about specifications and determine how you will be affected click here. 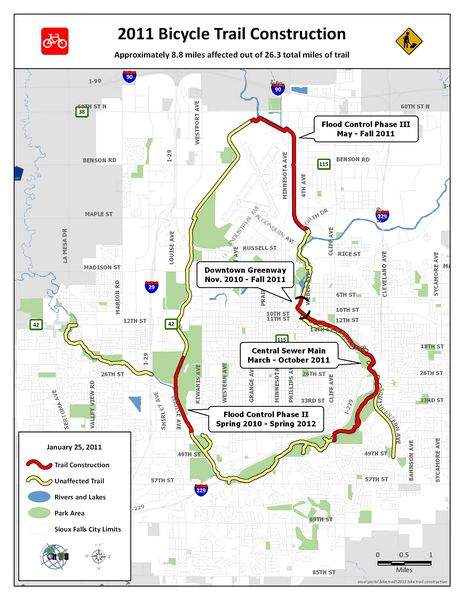 Plan released to make it easier to walk, bike in Syracuse area

By: Charley Hannagan / The Post-Standard

The F.O.C.U.S. Greater Syracuse citizen driven organization has released a temporary website with maps as a sort of prerequisite that will eventually lead to the reveal an overall plan to improve the cycling, hiking, walking and wheeling experience in Central New York. To find out more details of the strategic action plan click here.

For more information about the soon to be permanent website, its development along with committee recommendations click here.

To see program director for the Syracuse Department of Parks and Recreation, Chris Abbott, speak about his favorite places to walk in Syracuse click here.

Benefits of Bicycling and Walking

Given these many benefits, the result of a 1991 Harris Poll is not surprising. While only 5 percent of respondents currently walk or bicycle as their primary means of transportation, two-and-a-half times this number would prefer to walk or bicycle if better facilities were available. 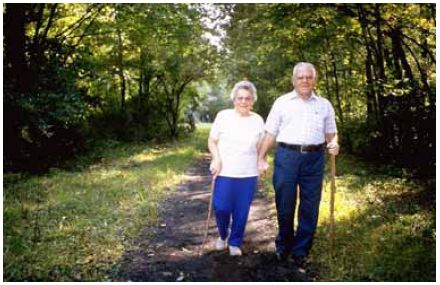